So who doesn’t love Christmas shopping, right?  Of course, I love Christmas shopping.  Let’s take something like shopping, that I already dislike on any regular day and then put me in a mode of “have to buy” on a December shopping day with people all around me, also “have to” buying and full of the cheerful holiday spirit we call Christmas, which any other time of the year would be call RUDE.  But anyway, the other

day my husband and I decide to split the children up for a couple hours in order to do some Christmas shopping and do it more efficiently.  We find over and over again that our children are very not only bearable but surprisingly civil, thoughtful and downright awesome when they are not around the other for periods of time.  We call it happy time, even though this obviously precludes my husband and I from any time of bonding.  But honestly, if we’re all together, we’re not bonding anyway.  We’re taking turns yelling at the kids to get out of the clothes, quit acting like a baby, put your brother down (who weighs like 5 ounces less than you), quit crying just because you fell for the third time in the last 300 feet.  If you’re going to run about frivolously, you just might end up running into a large planter or a metal decoration of some sort.  I’m really sorry, but I don’t want to hear about it—since it’s the tenth time in recent, and by that, I mean 5 frieking minutes!!!!!  Just hold still for five seconds!  PLEASEEEE  if you all talk to me at once, I can’t answer, and NO, you can’t climb on the large ornaments—put your feet down! 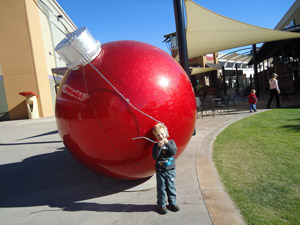 Soooo as you can see, alone time with one child each is really how God intended our family to run most efficiently.  So my four year old and I run off to pick up a couple presents for dad.  And after our six minute walk into the store that is 10 feet from my parked vehicle because C has to stop and pick four flowers for me, get gingerly out of the car (just to spite me) and laugh hilariously while he dodges my hand fifty times before we can cross the street…  I’m a little edgy now.  So we walk into the nicest tie shop in our neighborhood—mind you, there’s very little competition, but still…  I don’t think it’s Park Avenue, but the guys in there do.  They always piss me off, but today I don’t care.  I’m getting my husband a tie of my choosing, knowing he will indeed take it back because he does have better taste than I.  It’s true.  It doesn’t hurt my feelings, but he also loves Christmas…  so presents we shall have.  I go in and walk over to the tie rack, at which point I have already lost C.  He immediately dodged into a rack of suits as we walk inside, which as I may have mentioned the owners think are made of golden thread.  Puh-lease…  You’re not in New York , baby.  This is Phoenix.  We don’t do “fancy” suits, and even if we do—not one gives a shit.  So I pretend to ignore him, which as always, kicks me in the ass, instead of teaching him a lesson.  I can’t find him.  So I am trying to ignore him, while I feverishly look for him now, and all the while, trying to be cool and calm.  My neck hurts.  I hear him, so I decide to let him play in the coats and look quickly for the tie of Troy’s “take back” dreams.  I pick up one and take it to C who has dived into yet another rack, right below three sport coats that come in red, cream and black.  Seriously, who’s gonna buy that?  And shouldn’t we question their style if they do!!!  But still, I go over and try to get him involved.  I ask him if he likes the tie I picked.  He doesn’t care.  And he senses, as all small children do, that it would bring me great joy if he would help me—so he dove back under the racks.  I’m getting some, as they say, “negative attention” from the staff, so I firmly tell C to get out of the rack and go play on the chair I see ahead of me OR help me pick a tie for dad!  He picks the chair, shockingly, I might add.  I busily take the next 15 seconds of quiet to run around another 8th of the oval-shaped table of ties on display

while I overhear some jackass at the front desk, bragging about how he’s going to go skiing at Deer Valley in Utah next weekend, while he buys his faux fancy suits.  Oy, I hate pretentious people.  Which damn overpriced tie am I buying???  Hurry, hurry.  The check out person, who thinks he is Armani’s direct offspring (yes, there’s a lot of humor in that line)…  is saying, “Yes, where in Utah?, I love the skiing there.”  Please.  I forget how judgmental I’m being in my head as I glance over to see my son has found, not the chair I recommended, but the chair next to the chair I recommended, which is seated in front of a computer, a catalog the size of Texas and a scanner.  My son is looking for the bar codes in the books, so he can see how much the products are.  No, really, he told me he was “looking for the bar codes”, swinging the scanner about, radiating the room, flawlessly.  I tried to be calm and play along for a minute.  I had played hard ball already.  Round 2.  Let’s try the “okay, let’s do what you’re doing” approach.  He is mostly just wound up now.  I run back for my last quickly run at the tie table, choose my very favorite one from the stack, trying not to worry about whether my husband will like it or not.  I usually sweat it, a lot.  But no time today.  Too many other things to sweat about.  I walk over and tell my son we are going to pay now.  I walk confidently to the counter and stand in line behind a man who is dressed in his best “I’m so athletic” outfit and his sporty wife, while the kiss ass counter lady is taking hems out of a suit jacket on the counter.  She didn’t look up once, give me a smile, say I’ll be one minute.  She kept nice and focused on the jacket and the inane chatter.  I’m obviously eager to be out of the store, since I am still not in control of my child.  So I wait patiently.  No problem, I can take a few more minutes of fake land.  So I wait.  C runs up with an object that fits nicely and ergonomically in the palm of his hand.  It looks a lot like a shoe buffer, you know, when you polish your shoes.  So he opens it and pretends to buff my arm, full contact like.  And I really don’t care.  It doesn’t hurt, doesn’t seem destructive, and I ignore and condescending looks from everyone in the store except the irritating lady behind the counter, who is apparently taking the afternoon to sew the frieking jacket!  I’m getting irritated now.

So in the spirit of spreading the joy of the season, peace and love this holiday season…  Bite me.  You and yours.  And don’t ever ask me for a tie for Christmas.

To My Children On Their Birthdays