I reached a point of breaking yesterday as I walked through the store with my boys.  It doesn’t matter which store.  It was yet another place in the universe that my boys’ hearing was apparently sucked right from their eardrums and thrown far from their grasp as I spoke.  I watched as my children played out another episode of the pre-nanny version of a family in need of parenting help from an English Mary Poppins’ type creature.  It was almost unbearable.  I listened intently to my voice sound like a drill sergeant and my brain trying to click ahead of my mouth to come up with a credible response to infractions within the store—things I was able to remember and follow up on swiftly.  I read a line in the Economist last week concerning human behavior.

I think the article was about overcrowding in the California jail system.  And the line reverberated in my head.  I’m paraphrasing…  But something about human behavior can change if the punishment if swift and certain instead of harsh.  In my own mind, I had read my parenting book for the year.  It made sense to me.  So now I’m on a kick where I try to make things swift and certain, without harshness.

But then I realized that unfairly my boys must have some type of brain damage because they were unable to remember any directions I gave them.  And here I begin to jest because that’s how I roll.  It was time for an experiment.

I took the boys home after our trip to the store, where the directions I spoke were unable to be digested by their tiny little memory databases.  And I set up the experiment.  I sat their little butts down at the counter and told them we were going to play a game.

I put an assortment of things in front of them, arranging the items exactly the same in front of each child.  I then created a list of directions-six, to be exact.  I told them I would read the directions twice to them, and then they would need to complete the list without any help from me—in the order I read them.

And in my head I thought, “There is no way either of them will make it past the first direction.  I read them once.  I read them twice.  I watched.

My 4 year old performed the first function.  He put the candy corns into the blue bucket.  And then he ate one.  Well, eating a candy corn was number three.  I instructed him to stop the experiment.  He had no control over himself when candy was involved.  All he probably heard me say was, “Eat one candy corn.”  The rest was all white noise.  The little man is run by his need for all things dessert.

And my 7 year old, with his ADD diagnosis– I thought, would not remember the first thing.  I was going to be frustrated, but I was going to figure out a better way to deal with it than lecturing.  But right in front of my eyes, the child who I repeat everything to 400 time–quickly went through the list, as if it was written in front of him.  Of course, I was confused by this.  I checked the reflections in the oven, the windows, and the toaster.  How was he cheating?! 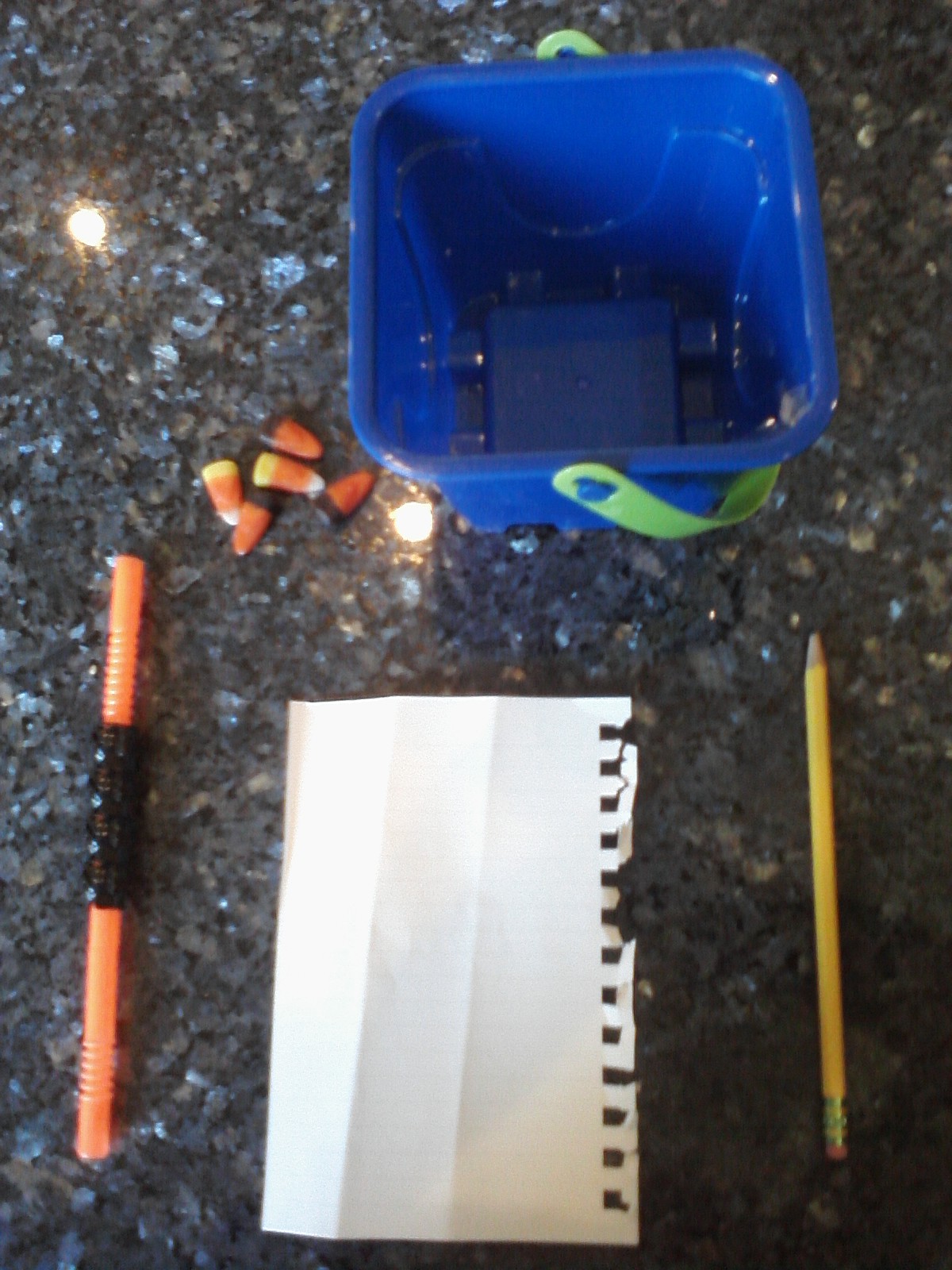 When I asked him how he did it, he said he just replayed the list in his head and then reorganized them, because he had remembered them out of order.  If my jaw could have dropped, it would have unhinged and literally thrown itself on the floor.  I didn’t show much of a response except praise.  I left out the, “Then why the hell can’t you remember to brush your teeth every single morning?  Why the hell do I have to repeat every son of @##ing thing every day as if….”  You get the idea.  I think instead, I decided on sheer relief.  The child was not impaired.  In fact, he was incredible.  I don’t know if I could have remembered the list of instructions I had written and read to them.

My 4 year WAS able to go back and finish the list in order after his brother finished, which was a good lesson to me.  Never tell him something when there is candy nearby.  Or just use it as a reward.  I will always get the best of him that way.  And luckily, he is also unimpaired.  With candy gone, the game went smoothly AND in order.

So what’s the “take away” from this?—No matter how hard I try, no matter how smart my kids may or may not be—my voice will always fly into the vortex.  My directions will always run screeching from their ear drums.  My voice will always induce fits and behavior that was exactly the opposite of its intention.  And I will always find ways to better the situation.  In the meantime, experiments are still fun.   And there is always a pre-made martini on the book shelf next to the parenting books.  To all the mommies who feel crazy today!  Cheers to you!  Cheers to the vortex and cheers to children who will one day follow instructions from someone other than us!