My little boy, at 3, was telling me he was afraid to go to bed.  He’s not terribly fearful by nature, so I wanted to delve in a bit.  What was he afraid of or nervous about?  Turns out he was afraid of some unexplainable monster-type apparition he hadn’t actually seen or experienced.  I am guessing “big brother talk” played into this one.  I listened and asked questions and decided to try drawing him an angel on the whiteboard in his room.

Now I may have mentioned I’m not a religious girl, but I do remember the peaceful thought of angels watching over me as a child.  I concluded that these angelic feelings would be my approach for this evening’s fear lynching. 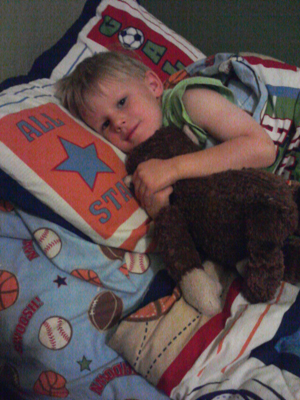 You know those moments you are so sure you have gotten something right!  I had sincerely taken the time to listen and try to understand where he was coming from.  I was thinking how important it was to intuit this situation, so as to keep from perpetuating greater fear.  I gave him a huge hug and kiss and put up my lovely little angel, hand-drawn on a whiteboard, whose five inch frame exuded love and protective kharma.  I smiled inside, thinking how lucky I was to think of this!  And off I would go to spend some time with my dear husband.  What a beautiful family we had!  (note beautiful thoughts following my experience with angel drawing—clearly it worked)  I peacefully asked my son where he would like the small angel to reside while he slept—on the wall, at the end of his bed?  And he looks at me and says something about the door to his room.  I say in my high-pitched kid voice, “Here by the door, dear?”  And he says, this time, clear as day.  “Why don’t you leave the angel outside the door, mom.”

“You mean so he can protect you by the doorway?”  I put the angel board near the door, and he motions for farther out.  How sweet, I think.  He is going to place the guardian angel outside his door.  He’s really getting this angel thing!

“No mom, why don’t you take the angel with you.  I don’t think I like him.”  I felt my chest full of proud air slowly fizzle out, like those stupid balloons my kids blow all around the house.  I was less hurt than disturbed at what I would do next.  I had nothing else–except tying him to his bed and saying it would all be okay…  just go to sleep.  But something inside me said that wasn’t it either…  Damn!

I’m pretty sure my son did go to sleep that night with me holding him on my chest while he fell asleep.  When white board angels don’t cut it, tiny, bony moms sometimes do.  I came to terms with my failure to explain angels and put my little blonde-haired joy of a boy to sleep.

And the darndest thing happened.  At breakfast the next morning, he told his dad and I he saw angels.  “Where?”, my husband asked.  Our son told us about the angels standing by the fireplace in the family room, thirty feet away.  He said they had been by his bed when he woke up in the morning too.  We looked at each other with one of those “sharing parents” types of looks.  This felt like one of those sweet moments you realize children have the keys to the universe.

“Really, baby, what do the angels look like?”  I had to know.  After my failure to create some sort of guardian apparition for my child, I wondered what he had created in its place.

“The angels look like you, mommy.  Angels look like mommies.”  And I held a truth for myself I won’t easily forget—until my next failure, that is.  On the other side of every perceived failure is a shiny sparkle of light that maybe something you did was right, that maybe something you intended to create was used for better outcomes, by little people who experienced it totally differently.  Maybe the beauty of being a parent is seeing what wonderful things our children make of the crude skills we have.  Maybe the nuggets we drop are seeds for something much more wonderful than we could ever come up with on our own.

Are You Futzing Kidding Me?