I found the words “stupid” and “ass” written neatly on my son’s homework, in that order.  I was going through the homework folder and my body clenched at the sight.  I then threw up some food in my mouth that I had eaten several hours before.  I searched freakishly for signs of red pen marks on the sheet of paper.  Had the teacher seen this?  Did this get sent to school?  I swallowed my half-digested, hard-boiled egg, which tasted like dirty feet on the way down.  Dirty feet and bile is worse on the way up. 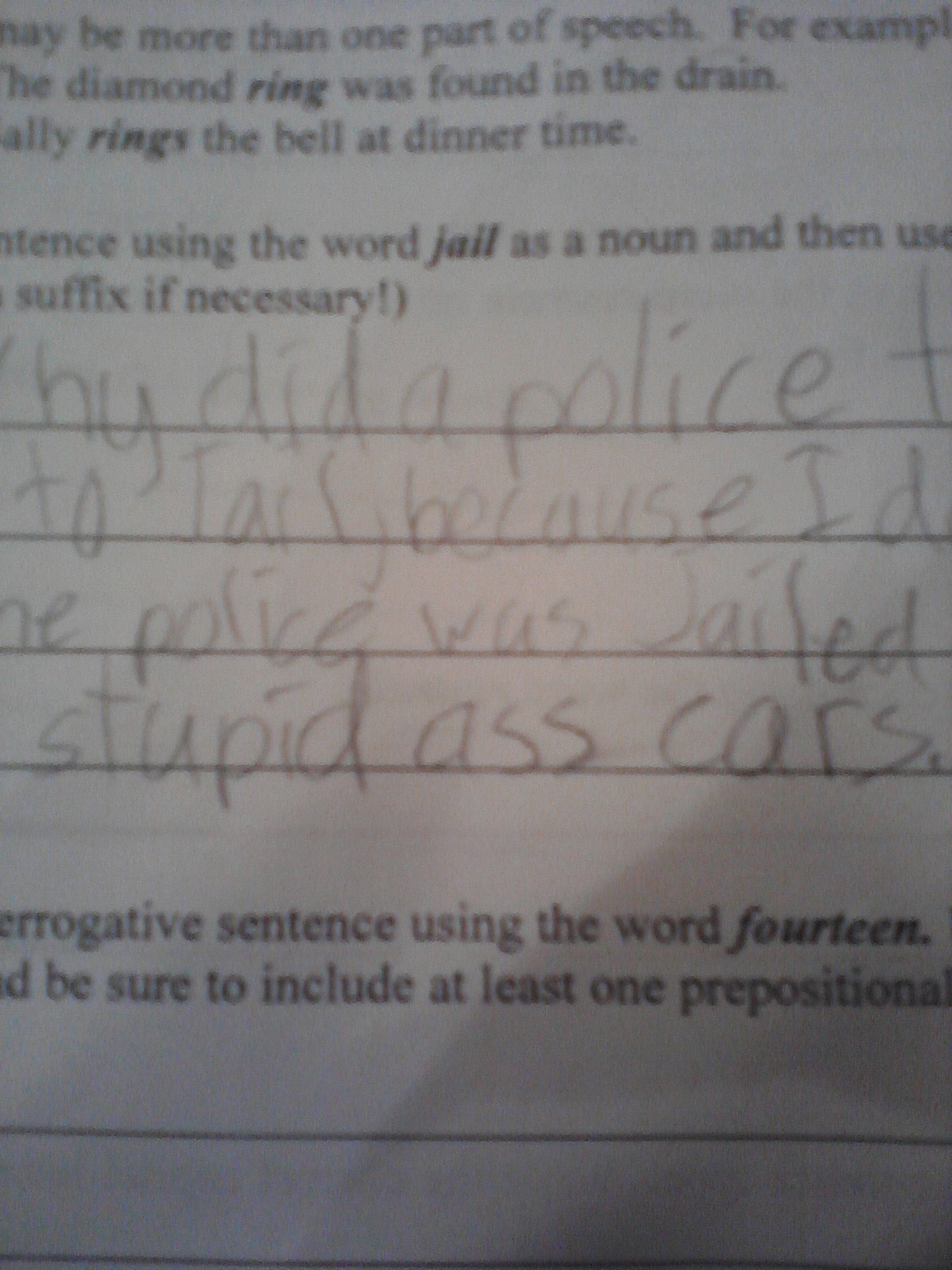 It’s not enough that my son takes up more time in the teacher’s classroom than the average child, because he is day dreaming or figuring out how to change around the electricity in our home during a math test.  Now he is cursing on his homework.

But really, what else comes to mind when you try to come up with two sentences in which to use the word JAIL—one as a noun and one as a verb?  Obviously, one would need to use the words, “stupid ass” in order to express the necessary sentence structure.

I was terrified and frustrated.  It was, of course, that week that we hadn’t finished his homework on time from his three day sick absence, and he had picked a slightly lesser version of “War and Peace” to do his second grade book report on.  After reading it—he announced to me that he did not know what had happened in the book—like at all.  So then I proceeded to not show any frustration by ranting and raving for ten minutes.  “You’re telling me you spent three hours tonight finishing this book and you don’t know what happened?!”

“Anything, babe.  Give me anything.”

“Well, I didn’t read the book so I can’t write it, and this qualifies as helping when I yell at you to remember something.  Just give me something, and we can write a report.”

“There was a Mr. Fagaa…  something guy who was really gruff.  Mom, I really think I should go to bed.  I’m really tired.”

And it only got worse.  And he only kept calm and didn’t appear to have retained a name or event from the 150 pages.  Bitch of it is, he has many times in the past pretended not to know how to do things like read or speak in order to escape work.  His kindergarten teacher didn’t know he could read for like 4 months.  So I pushed harder than I would have- had my child been any other child in the world.

My brain began to short circuit.  I ended up reading the book that night, because my husband offered to do it—you know, read the book and then help my son write the book report at 6:30 the next morning—from work—over the phone.  Really, it was nice but completely ridiculous…  So I read the damn book, with a really shitty attitude.  It sucked.  It was the most boring classic story about some stupid ass pigeons and their owners.  Seriously, no wonder he quit comprehending the words on the page and tried to just reach each word, like he was told.

So I wrote his second grade teacher to let her know we would be turning in the book report late.  And like most college professors of second grade classrooms, she let me know it would receive a lower grade for being late.  I didn’t care.  She offered to see if the book seemed too hard.  My son forgot to take it to school the next day, the last day of the year.  Silly me.  I had only put it next to his backpack instead of super gluing it to his freaking forehead.

Okay, so did the teacher see “stupid ass”?  The answer is no—I think.  I felt like maybe it was my karmic giveback for the week.  Someone in the universe was sending me a break, not on parenting challenges but on getting caught by his pious and wonderful teacher, who I need to be on our side most days—so my son can continue attending school.  So my incredibly intelligent, crafty and often absent from what’s going on in front of him—child—can get through another week—with his mom who is just trying not to lose her mind going to second grade again too.

As of right now, I am thrilled it’s Christmas break.