On Becoming THAT Parent

I have to chuckle to myself as I watched a friend admit to being THAT parent this morning.  And the only reason it’s fair that I chuckle is that I became THAT parent not too long ago myself.  You know, the parent that’s way too embroiled emotionally in their child’s little league game or stressed out because their four year old just isn’t living up to their potential as a child star at whatever the suburban game

it is they are playing this “session”.  Come on, we’ve all signed up for the “session” of the new game of the season or the game our friends have asked us to join in or the secret passion we have that we would just LOVE our kids to enjoy—you know, if they want to.

But let’s be honest…  some little part of us wants our kid to succeed.  It would “rock” if they were the fastest, best at defense or offense, or any damn part of the game sometimes!  Don’t they know how important it is to be good at everything they do?!  They’re four or seven or eleven, and aren’t they aware that this reflects on them as people!  How will they succeed if they don’t give everything their very best!!!  How will we look like the amazing parents that we are—if they don’t push themselves…. Okay, you’re on board now, right?  And if you’re not—don’t judge.  I’m warning you that this moment of weakness will attack even the most self-confident, open-minded, hippie loving parent.  And as I mentioned I only recently felt this beast of an emotion overtake me when my 7 year old was riding in a BMX race—for the third month and STILL coming in last… not just last but like “where the hell did the kid go with the paper plate license plate?”  And I was irritated.

I had asked him calmly on the way over as he told me for the twelfth time that he was going to get a trophy for his brother…  And I—calmly—asked him if it was really important for him to win.  I said, “Do you really want to win—because I have some things you can try if you really want to win.  If you don’t, it’s no big deal.  You should really enjoy yourself.  That’s what is most important.”  Huge mommy points, right?  I’m so rational, blah, blah, blah, doing this for my son, not for me… 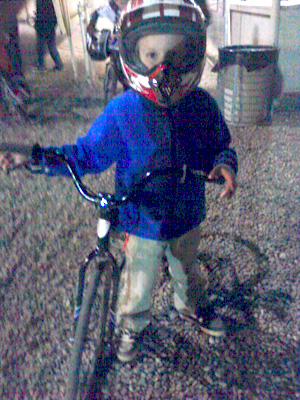 And he assured me he wanted to WIN!  I feel the adrenaline surge through my veins as I start to point out that obvious things he could do to cut off the 30 seconds he needs to compete here.  And I know that because I was being super easy going and timing his laps like my dad had recommended.  It had helped.  He was cutting time off his laps, but he still wasn’t in the “look we’re all in the same race” section of the track yet.  I mentioned calmly that he could NOT hit the brakes as he comes out of the starting gate…  He waits until everyone passes him and then starts pedaling…  He fell once.  I pointed out sweetly that he would never win if he waited for everyone to pass him before he pedaled.  He listened quietly, not showing any emotion.  I also patiently pointed out that he had taken the class twice now, and he needed to pedal to the bottom of the hill and through the entire corner…  (my voice is getting excited, and I try to slow myself down, but I feel I’m spiraling.)  In fact, I can almost envision myself winning some BMX Mommy Cup in my mind’s eye as I race through the track, explaining faster and faster exactly how he should take each corner, how he should pass, how he should push through the pain, etc, etc, etc…..   And then I end with a pathetic…  “Just try to pass one kid this time, buddy.”

I looked in the rearview mirror, trying to remember I was talking about his race and not mine.  Boy, was I a blabber mouth.  Had I given away that I was competitive?  Did he get it that I was no longer talking about him.. .  I was reliving my own days of racing—that I probably didn’t live up to my potential either.  Man, I so get so many things about reliving our youths or about why we know so much AFTER we’ve lived it…  I get so many things about my relationship with my own dad.  I SO get it…

Let’s suffice it to say–during the race that night– that my son actually had time to stop his bike to wave at me while I cheered loudly, embarrassingly and crazily on the LAST freaking hill of the race…  20 seconds behind the group… not a look of pain or a trace of sweat on his sweet little face…  He hadn’t for a moment considered that the conversation in the car should be remembered for the moments after he stepped from the car.  And I imagine he had even pinpointed the fact that I might have been being “THAT” parent and realized the guilt would probably eat up any chance of me repeating that “helpful” list of pointers ever again.

He was wrong.  I did, in fact, bring it up on the way home, in an ever-so-slightly elevated voice–that next time—if he wanted to win, he should probably come across that finish line sweating, in pain and with blood on his knees if he was going to race, if we were going to commit to three hours every Friday night—I wanted to see him TRY!!!  And that didn’t mean just riding through the fallen riders to get to the end before the kids who were actually competing.  I told him I would buy him a freaking new car, (always huge motivation for children under 10), if he would PUH LEASE show me that he cared!  If you’re going to lose, dear, please lose with some sweat and dirt all over ya!

And so crashed another pillar of my ideal parenting pavilion, which I created well before I actually had children, in the days when I merely watched other parents—parent incorrectly—and dreamed of the day I would step into that position and kick some serious ass.  I would have amazingly well-adjusted children, be emotionally involved at all the right moments and never put my issues on them.  So crashed another moment I thought I would have aced.  Yes, we will still participate in BMX.  And we really do want our kids to be happy.  The point isn’t that we blow it as parents.  Our kids also know that we love them.  They soak in that we show up, that we participate, sometimes too passionately, and that we really do care.  And even though we show our weaknesses, we still aren’t awful parents.  We’re probably competitive and want the best for them.

So when my 4 year old’s coach came up to me today and said, “This little guy is competitive.”  This is after he spent the entire game hugging his little buddy and watching the other boys play offense.  I said, “I know. I really do know that.”  He said, “He may not run after the kids like you want him to, but he will be competitive when he’s ready—not when you or I think he should.”  I was wondering why coach felt this speech was particularly appropriate for me at this time.  I really didn’t feel stressed about it.  I had already won Mom of the Year recently for trying to make my child be more competitive.  But I took it as a sign that my intensity was peeking through my easy-going.  Take it easy…  Enjoy…  and let your kids succeed—sometimes on their own.  I’m learning.  Thanks, Coach.