Fishing for the Rich

So I have an MBA.  Who doesn’t, right?!  But I love business, not because I own a successful business.  But I’m a great theoretical business owner.  I read about them, I study them, I ask lots of questions of my friends with businesses.  It’s on my bucket list to own my own business one day too.  And this weekend while camping, I found a great business model.  And I felt the ways it could be exploited personally.  We took the kids camping with a bunch of families.  It was a hoot.  Yes, I said that.  It was!  The kids played like there was no tomorrow, and the adults laughed and chatted and cooked and drank.  It was perfection.  And on the way home, we stopped by a hatchery for rainbow trout fishing.

We’d heard about this place from several other parents and decided to drop by.  My husband and I have fished, but we don’t love it.  So the chance of us buying all that gear so we can fish with the kids is—not going to happen.  So this seemed like the perfect stand in.  We jump out of the car and tell the boys they are fishing.  They are so psyched, and we see some friends coming out of the hatchery as we walk in.  They warn us, “It goes fast.  Take turns to spread out the time.  Otherwise, you’ll miss it all.”

They weren’t kidding.  We grab the kids, and our friends politely stand by to watch our boys try to fish for 10 seconds too.  Here’s the great business model.  It’s cheap to fish, to rent the gear and to clean the fish.  You just pay per pound for the fish you catch.  No big deal.  Sign us up.  Besides all the fish we see are like 6-9 inches.  How much would that cost? 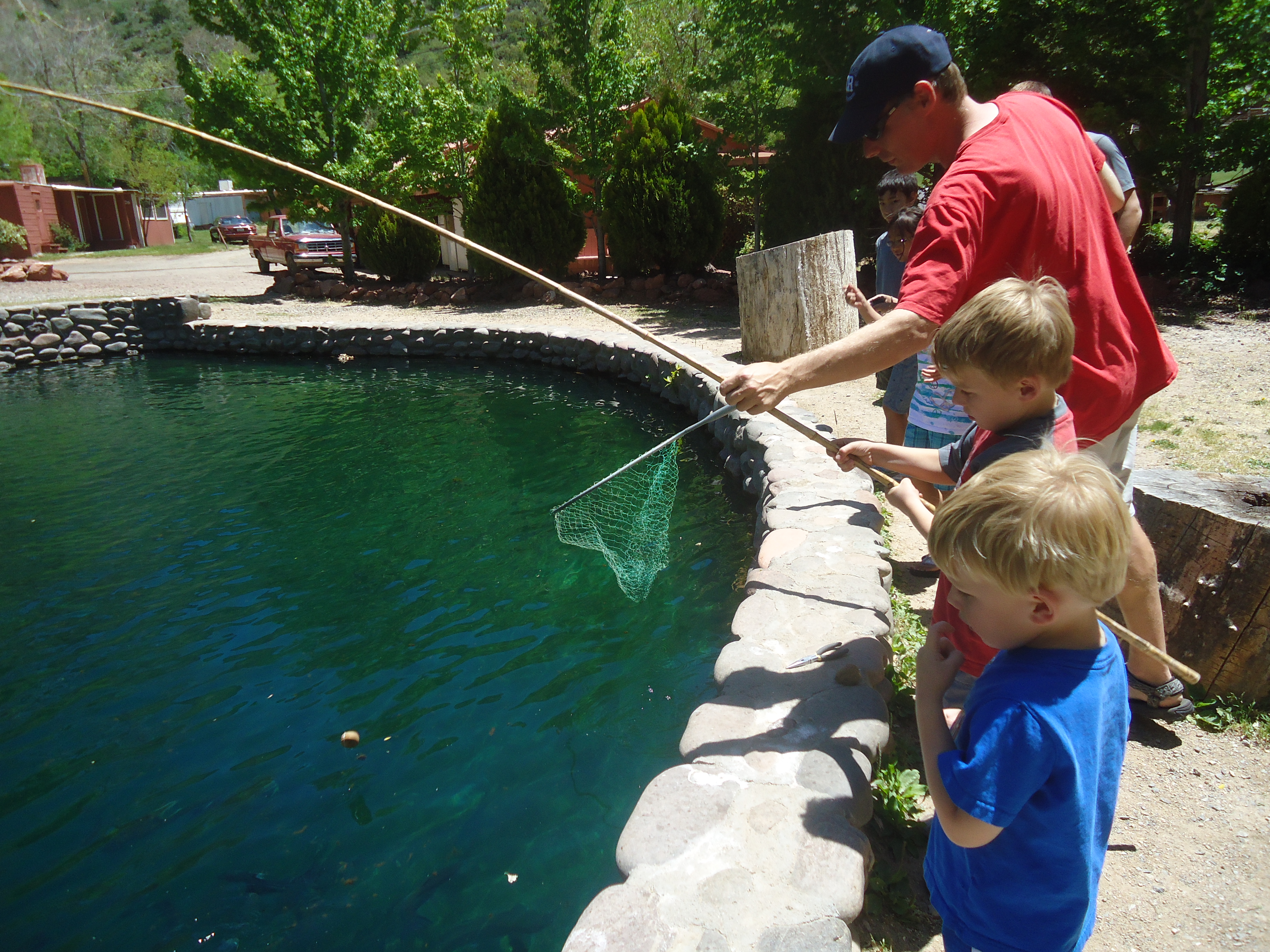 Well, 30 seconds later, my oldest son casts his line, Huck Finn style–and before we could count to 2 and a half, he pulls a 14 inch trout from the water.  Everyone gasps.  No really, cameras are flashing.  The fish paparazzi are out!  Our friends are excited that my boy caught such a lovely fish—and it is cool.  My son, the thinker, of course is just a little troubled that the fish is bleeding all over the bucket he is in now.  Apparently, when he had asked his dad to go fishing, he had meant that he wanted to catch a fish to take home and raise.  Little misunderstanding between the men, need I say more.  So while my husband is caringly trying to explain that we are not onl–not going to raise the fish at home, but we are going to kill and eat him.  My explanation would have been a lot less careful than my husband’s.  I was glad my he was giving the current speech.

And energetic son #2 steps up to the plate.  He is ready to go and casts his line.  One, two, three, four, (this is taking all day!) and a freaking whale jumps from the water stuck to my son’s line.  The pond barely seemed large enough to house a fish half this size.  Okay, it was 17 inches, but seriously the whole place stopped to stare, including the fish!  I’m counting how much money is left in our bank account and if we are going to be able to tie this beast to the top of the car for the ride home?!  Are you kidding me?  We didn’t catch one, but TWO of the largest fish available.  The man at the counter mentioned he didn’t even know the fish grew that big in the pond.  Awesome.  So while the fish picture-takers are flashing photos of the large fish, my son #1 has fallen into his thoughtful mood, which always precludes a two hour questioning period about why the world is the way it is, why do we eat fish, who eats us and does it hurt?  And son #2 is gleefully yelling, “I caught the biggest fish, huh, dad!  Mine was the biggest!”  And in his ever so graceful way of winning, he hasn’t thought about the fact that he is now going to need to consider fishing as a career since his college fund is going towards the cost of the damn fish.

It was the best five minute, million dollar adventure of our lives.  And I would do it again in a second, only I would probably just buy the damn rods and make the kids sit by the stream for hours upon hours.  Then we wouldn’t actually have caught a fish, they would have hated fishing like we did as kids, and we would have saved tons of money!  But bygones for now.  Another one to chalk up to experience and write up as free advice.