I have to admit to you…  I was never power hungry in my 20’s.  In fact, I probably ran from the idea of being powerful and being “in control” of anyone or anything.  My mom was super controlling, and I always promised that I would never be “that” way.  As many ideals, we end up trading them in for some humble pie when we realize life is really just a buffet with an array of shades of choices with the same name on them.
Lying, for example…  You never lie, right?  But have you ever lied?  How many times did I know that the truth was the best policy, and I usually am veryyyy honest.   BUT then one day you find yourself choosing a different shade of truth.  It’s not really a lie, you tell yourself.  But it’s not the whole truth, but why hurt someone or why this or why that?  It doesn’t matter the extent to which you choose, the point is you end up understanding that life isn’t black and white.  There is no such thing as a controlling mom and then a not controlling mom.  There are shades of gray.  And I truly believe anyone who doesn’t see that is in super awesome denial.  And they might be happier than I, believing their choices are absolute and driven from some moral podium well above earth.  But I don’t envy the fall from the podium the first time some force greater than your morality makes you realize you are like the rest of us…  immoral in shades of gray and human. 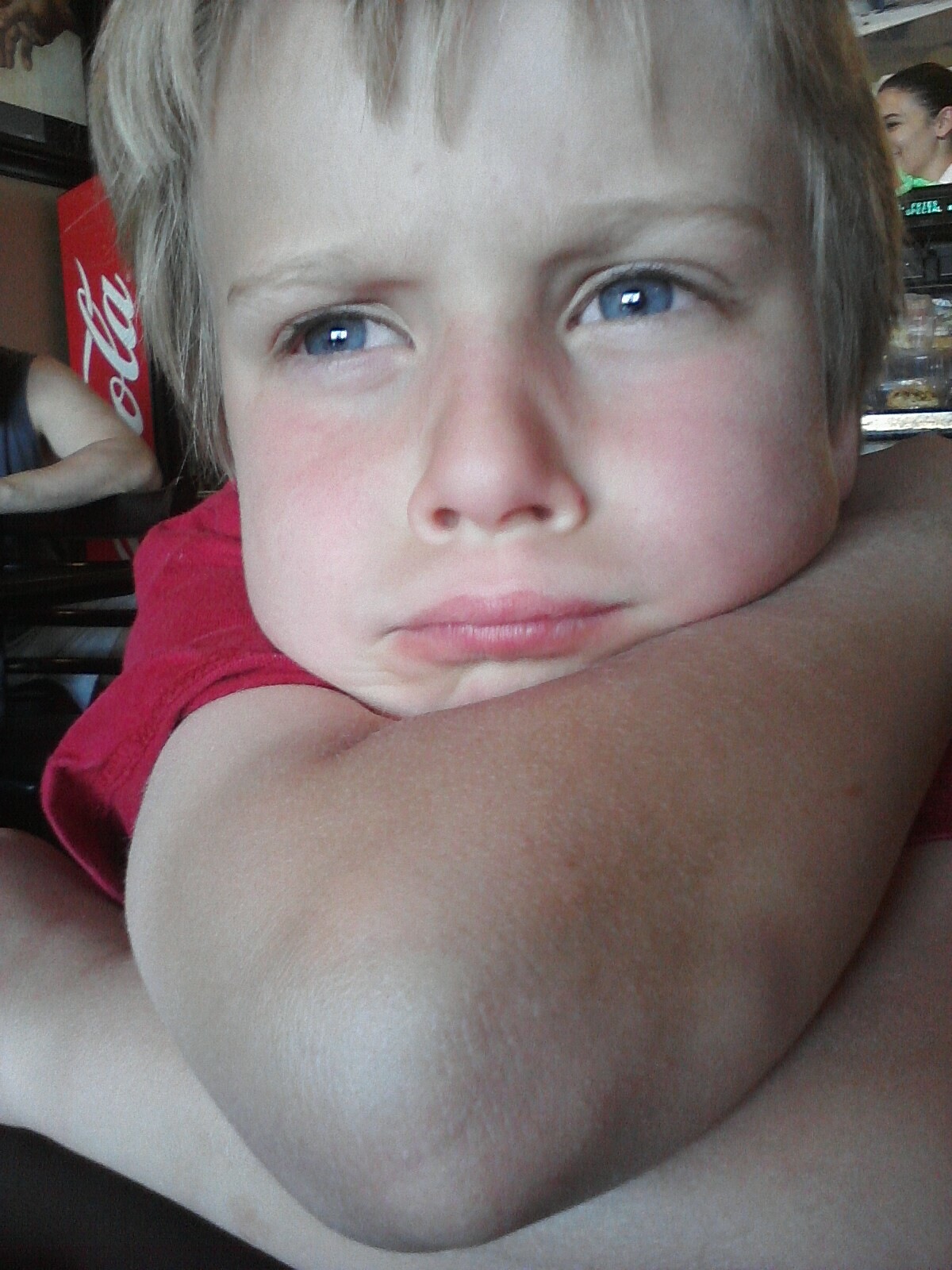 Sooo, after that philosophical introduction, I bring you back to me, my predicament as a mother.  I realized one day that I had started out not being controlling and ended up in the back seat of my car, being driven to insanity at a very high rate.  My kids knew I wasn’t in control.  Now this wasn’t last week that I realized this.  It was a long, long time ago after the first 100 times I realized my kids thought negotiating with me was a fun game like painting.  It had no meaning, and it was fun to win—but not to the bettering or detriment of anyone else.  I never showed signs of loss, humiliation or pain from not winning a negotiation.  And in fact, some moments in my head I felt I was that superior human being, standing high on my moral ground, knowing that I was more evolved than those other moms who were about winning and being in control.  My kids were going to grow and evolve more organically.  Horse hockey!  I fell, and I fell hard.

Thus began the second phase of my parenting history I like to call the Italian Mother years.  I yelled and screamed and even threw things across the kitchen floor—not at anyone, mind you—but just for effect.  Turns out my kids knew they were in no danger and rarely showed signs of distress during my episodes of “shock value”.  So I decided that wasn’t working, and I have recently decided to try out manipulation.  Nooo, no the bad kind…  not the kind that bitchy mean girls in high school used on the poor and weak-minded.  I’m talking about the illustrious, intellectual, world changing kind of manipulation…  Okay, mostly, I want to win more and yell less…  it’s that kind of manipulation.  And sadly, my children have years of expertise in arguing and negotiating with mommy.  But still, the other day I had a moment that felt so delightful and grand.  It was that moment when you know you’ve fallen from some sort of grace in the universe, but you relish the delight it brings so greatly, you just don’t care.  Give me the ashes and cinder.  I’ll sit in ‘em for three weeks.  Just don’t interrupt the smile on my face whilst I sit next to Hester, the lady with the big red “A” on her forehead.  Soooo that’s the set up…

Here I am driving down the road after picking up C from one school and J and the girl in carpool from another school.  We are driving in our oversized vehicle, which of course all us suburban moms drive…  That’s a whole other rave…  But I have one of those ridiculous vehicles that uses tons of gas, uses a big motor and has capabilities not even touched while driving on surface streets all day, taking our small children from one place to another.  But I guess it’s nice to know you could always 4 wheel through the desert at any moment if needed…  Anywayyyysss, my seven year old decides to start acting up in the wayyyy back seat of our oversized vehicle.  There are two ways to look at that.  He is far away, so it’s quieter and less distracting to me as the driver.  BUT it is also so far away that I can’t reach for his ear or throw a dart or some other sweet mommy thing when he starts acting up.  It started small.  He was yelling.  I asked him to quit…  four times and a threat to throw his fish in the toilet when we got home…  something mild but potentially disappointing to him.  He walked himself through it and decided to quit.  Then he starts climbing the seats with his body, so the two kids in the back are touching the ceiling with their heads and laughing hilariously.  And truthfully, I have to be careful, mostly because it’s someone else’s child in the car!  So I threaten quickly and firmly.  You have to quit that because your seatbelt will not protect you if we crash.  Now this is after I used the tried and true…  let the excitement fizzle out on the hilarity before intruding.  The thrill of doing something wrong puts itself out sometimes without my needing to inject my power!  But then things got out of control.  It was loud and bodies were moving all over.  I honestly can’t remember the last infraction right before I yelled, “Do you want me to use the ejector seat, J?”   The word “ejector” didn’t ring a bell right away.  The craziness continued, and I’m imagining the story that will go home with the sweet little girl who shares her safe and insane ride home with us…  It was gonna be bad.  It was gonna sound something like, “J was climbing up the seats and yelling all the way home, saying poopy diaper and telling his brother he doesn’t like him…  His seatbelt wasn’t even on him, and his mom was yelling that she was going to kill his fish and make him sleep in the back yard tonight.  Do you think he’ll be safe with the coyotes?”  And this mother of a little girl who chatters and laughs in her seat the whole way home was going to fire me and blackball me from the carpool list at our local school.  No, it was going to be bad.  I gathered my strength.  I couldn’t let it continue, and I couldn’t just yell.  My threats were stale apparently, so it was time to try my new kryptonite…  manipulation…  lying…  all of the above.

“J, if you don’t settle down right now, I will push the ejector seat button.”  I am talking very loudly, kind of like yelling but with less fear—more like I know what I’m talking about…  faux power…  It was good.

“This red button on the dash (pointing to the hazard button) will eject your seat right out of this car.  Would you like me to push it?”

“What does it do?”  interested but not yet fearful.

“It will pop you out of the top of the car and out into the desert.”

I’m sensing he is going to call my bluff so I hunker down and try to think fast and talk confidently. “

“This red button.  And you will fly through the roof and out of the car.”

He’s buying it?  He’s never bought any lie I’ve ever told!  Why…  Don’t question it…  Focus!  “No, there are parachutes, but you will have to stay in the desert with the cactus.  It’s too dangerous what you’re doing right now.”

“How do you know which seat is going to adact?

“I have a code that lets me know which seat is going to be ejected.”

He’s not yelling anymore, and he’s in his seat, eyes burning the red button. “So if I push that button, one of the seats will fly out?”

“Not unless you use the code.  Do you know the code, son?”

“Okay, but I won’t be able to pick you up until later, and I hope you don’t land on one of those large cactus.  It would really hurt.  I have to get your friend home safely, and it ruins the car.  I only use it if I absolutely need to.”

“You can try the empty seat.”

“Son, this is no joking matter.  I will not ruin this car until I absolutely have to, and if you’re crawling up the side of the car and yelling and screaming and calling names, I will have to push the button.  I don’t want to have to say it again.”  Bonus round, he can’t see me smiling, beaming gleefully as I, for the first time since I’ve had this recalcitrant, challenging, difficult, discipline-proof child, have made him think about discipline that will make him stop what he’s doing.

He throws out one last idea about how it works or the time frame he’d be left in the desert or whether we could shoot his brother out of the car or whether or I would give him the code or why had he never seen this button before.  I had answers for everything.  It was like I couldn’t be stopped!  Answers flew confidently from my lips.  He could find no loopholes, and I felt the adrenaline surge!  This must be how he feels when he wins all the time!  This is what he craves.  This is the holy grail of suburban life, the little moments in between school and classes and family dinners!  I understood why he always wanted to argue with me, negotiate endlessly and give up toys, chocolate, friends, fish–anything I offered as a disciplinary measure.  I got it!!!  I had the fever.  I looked back one more time as he made his last plea, asked if he had his parachute on, and reached for the button.  My mind is racing, trying to decide how far I should take it.  There’s no way this will actually work—and as my finger reaches for the button, I hear a scream from the back seat.  My cantankerous child is red and yelling.  “Mom, don’t touch it!  Mom, I’ll quit!!!”  The even bigger beauty was that all the other children were smiling at me.  I think they thought Jack is always the one in trouble so they won’t be in danger’s way, but we all shared a moment.  We saw Jack break down and yell for me not to use the disciplinary measure I had created.  I can’t tell you how good it felt, and every once in awhile I still throw my finger up when he’s pissing me off, and he still yells.

I will never know what button I pushed or how I ever convinced him of any truth to the ejector seat button, but I will never ever buy a car again without a red button in front—to remind me of adrenaline, success, outwitting an opponent, winning an argument and seeing my son squirm like he should have done years ago!  Here’s to me, my new parenting style, hell—where my husband tells me I’m going, and the years ahead of me.  Here’s to duplicating manipulation, lying and all those horrible things, but only for a really good cause…   Wait, let me think of one!