Are You Futzing Kidding Me?

You futzing kidding me?

Yes, that would be a nice way to say that phrase.  You can fill in the “F” word with a lot of nice words that begin with “f”.  I get it, but nothing really gets the job done like the real thing.  For me, there is this cathartic release of all things negative following the utterance of this word in any sentence, in context, out of context, for a reason of magnitude and for just no reason at all.  I find solace in speaking this word whenever I am beyond the line of reason, and sometimes it just makes me giggle because I know someone-somewhere wouldn’t approve.

It’s the little girl at Christian school in me that still finds cursing a joyous pastime-just because it’s not allowed.  And I feel like parenting is the final frontier of cursing.  Before you’re grown, you get in trouble for cursing.  Growing up, kids would get spanked, their mouths washed out with soap, or their toenails removed while hanging from a sycamore tree…  That is what made it such a joy for me to curse as a teenager and now as an adult.  And no form of parenting has been able to squeeze this awful habit from my life.  I wish I could say I am much more mature than this, but I’m not.  I have given up many a thing as a parent, and I intend to continue to grow and mature as life teaches me new things.  But for the life of me, I still do not know why I shouldn’t curse?! 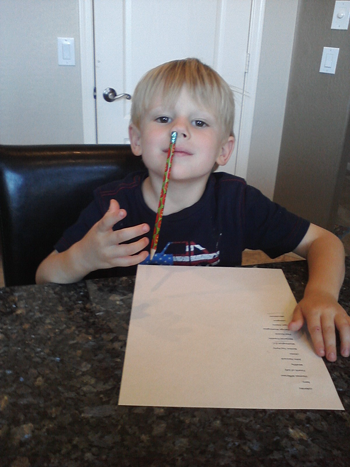 My husband has repeatedly told me I need to quit.  I, however, would like to argue that it is much less detrimental than illegal drugs and less expensive than shoes.  And I have a system in place so the children understand that although I do not condone their using the words I do—I intend to continue to use them.  They now refer to them as “mommy words”.  I hold my chin up slightly and elegantly and say “That’s right.  You are not allowed to talk like that, but mommy is.  I better never hear you say these words.  They are not nice for children to say.”  Some call this a double-standard.  I call it life, baby.  I don’t pretend I don’t curse like my own mom did.  I own it.  And I absolutely refuse to have my children become sailors while living in my house!  And just as proof that I have been such a good mom and taught my children the great benefits of respect, when in the car the other day, my son became increasingly frustrated at something terrifying like his seatbelt locking up or dropping his LeapFrog or some other tragedy.  Instead of cursing, he politely said, “F Word!”  I have to admit I couldn’t stop giggling, which hopefully he misconstrued as great disappointment and tears of sadness.

I said, “What did you say, son?”  He said at his tender age of 4, “Well, I’m not supposed to say that word, right?” with his right hand thrown out in determination—as if I was asking a stupid question.  There was no infraction to be handled here! I did not wash out his mouth, and I did not praise him.  I simply replied, “No, son, you are not to say that word.  And I would like you not to say ‘F Word’ either.”  There was a bit of an ensuing argument but nothing of consequence.  I explained that he could get in trouble at school and see Ms. Banks, the ultimate in wrongdoings in Preschool World!

I felt like this wasn’t the worst thing that had happened in a long time!  I had truly succeeded in raising respectful and thoughtful children who obeyed my rules and understood the underlying concepts.  My husband was not as sure of my success as I was.  And sometimes we just have to agree to disagree.  He asked me what would happen if I got called into school for our little peanut talking like that.  It was questionable, I agree.  I told my husband I explained to our son that this type of language would be questioned at school.  “And honestly,” I told him, “since I’ll have to attend the meeting, I’ll probably just tell them you curse.  And I apologize for that ahead of time.”  But wouldn’t that be awkward if I told them it was me?